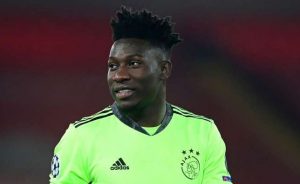 Ajax goalkeeper plans to leave in the just-concluded window was rejected and,

he ignores an offer to continue his career at the Johan Cruyff Arena.

for free in July 2022 if no decent transfer offer is submitted in the winter transfer window.

Onana has entered the final year of his contract with the Sons of the Gods and he has rejected their offer for an extension.

During the just-concluded summer transfer window,

the Cameroon international was a subject of interest from Arsenal and Inter Milan,

but the two clubs could not find an agreement with Ajax for a deal.

“We’ve been very clear. We have been trying to extend his contract for some time.

That has not worked out then you allow for him to make a transfer in this past window,

that also didn’t work out,”

When asked if the 25-year-old can change his mind and accept Ajax’s offer later,

“You never know in football. But I have to say that, at the moment, I don’t see that happening.

“It’s possible but at a certain point it still has to be for a decent sum of money.

Otherwise, as I said, we have to go our separate ways.

If the offer is not enough, then he’ll leave in July for free.”

Onana who is currently serving a nine-month doping ban, has been allowed to return,

to the team’s training ahead of the completion of his punishment in November.

The Cameroon goalkeeper has been training with a personal trainer since February to maintain his fitness level.

“We have decided that Andre will start goalkeeper training and team training sessions with Jong Ajax,” Overmars added.

“The question, for now, is whether he will earn a spot with the first team in the long term.

“We have now moved on without him and have recruited two keepers during his suspension.

Both an experienced and a talented one, the latter being one with an eye on the future.

“The team has already started the season and is in the process of team building.”