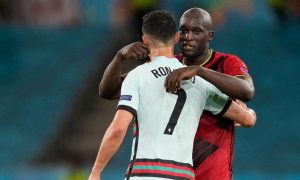 Former Inter Milan striker  says  “He has a long way to go” before he can be compared to Cristiano Ronaldo.

Ronaldo scored his 110th and 111th international goals this week,

At age 28, Lukaku has netted 66 times for Belgium, giving him an outside chance of,

eventually catching Ronaldo. But the Belgium star says any talk comparing him to the Portugal star is premature.

Lukaku said at a press conference ahead of Belgium’s World Cup qualifier against Czech Republic on Sunday – a game in which he is set to earn his 100th cap.

“Don’t ever compare me to Cristiano Ronaldo, never,”

” Ronaldo is, for me, in the top three best players in the history of football,”

he continued. “I’m not going to rank him from first to third but he’s in there.

“What he has achieved in football today for players of my generation is something exceptional.

“I was lucky enough to play against him in Italy and now that he’s back in the Premier League, it’s all good for English football.

“As for the rest, comparing statistics and all that, it’s useless.”

Ronaldo and Lukaku can be lumped in at least one category together.

Former Premier League stars who have left Italy and returned to England this summer.

After helping Inter to the Serie A title last year, Lukaku has come back to Chelsea in a £98 million ($136m) move.

The forward has already started two Premier League matches for the Blues, scoring in his debut against Arsenal.