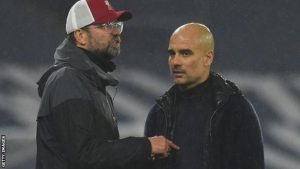 The Spaniard, who took over at City in the summer of 2016, also faced Klopp, who became Reds boss in October 2015, when he was Bayern Munich manager and the German was in charge of Borussia Dortmund.

Guardiola has lost eight games in all competitions against Klopp.

Which is more than against any other opposing manager.

Manchester City are a point behind Premier League leaders Liverpool and the teams meet at Anfield on Sunday (16:30 BST).

“Since I arrived here – maybe not the first year – Liverpool were always there,”

“Jurgen Klopp’s teams helped me to be a better manager,”

“He put me at another level, to think about it, to prove myself, to be a better manager.

That is the reason why I am still in this business.

“The last four years, all the time, we were both there.

It’s the biggest compliment that both clubs were there.

“But in the Premier League there are not just one or two, there are many teams who can fight for the league.”

Read Also: ‘One Day I Wish To Return To Barcelona – But I’m Not Done Winning Trophies In Japan’ Andres Iniesta

Liverpool were beaten 4-1 at Anfield in the league in February when the two teams last met.

Klopp knows his side will have to be at their best against City.

“This is a really special game every year.

You have to be your best version, and only then, you have a chance,”

“We have to play a proper football game to have a chance but it’s Anfield. We are really looking forward to it.

“They [City] are probably the best team in Europe at the moment.

Last weekend they played Chelsea and everyone was talking about how good they [Chelsea] are, which they are, but City were clearly better that day.

“We have to win the game and score goals.

But we have to defend at the absolute highest level to stay in the game.

And make sure the goals we score make the difference.”