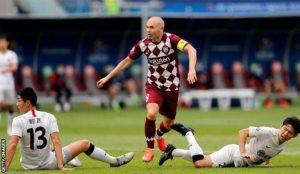 Former Barcelona Star has a trophy haul which reflects his status as one of the great midfielders of his generation – a World Cup and two European Championships with Spain, four Champions Leagues and countless other silverware with Barcelona.

In the past three years Iniesta has called Japan his home.

He recently committed to a new deal that will keep him playing until he is almost 40.

He scored the winner in the 2010 World Cup final and has produced mesmerising moments on the biggest stage.

But the foundations are “stuff I used to do when I was 10 years old”.

“Those essences come out in training or matches and I am just led by them,”

“When I was a kid I was basically playing in the streets of my hometown or in the school playing yard, and that environment helps you evolve.

“The connection to that environment and who you are and what type of person you are brings you to being a certain type of player.

In those environments they need to try to adapt and gain some skills.

Each environment helps you get better.”

“Barcelona was like an exam every game and you had to pass that,” says Iniesta.

“That’s the base and each time you have to adapt to the environment.

“I’ve had different coaches. I started with Louis van Gaal.

And then there was Guardiola, Luis Enrique and Ernesto Valverde.

All coaches teach you something and you can learn something from all coaches.

“I have been lucky to have played a lot of games in my career and you encounter a lot of teams, a lot of proponents,” says Iniesta.

“Playing against Real Madrid when Mourinho was coaching – or Carlo Ancelotti – are experiences which really enrich you.”

Barcelona have not been crowned European champions since 2015.

When a certain diminutive Spaniard produced a man-of-the-match performance in a 3-1 win over Juventus.

And the club’s current financial struggles mean that glorious evening in Berlin feels like a distant memory.

Read Also: Harry Kane Came Off The Bench To Net A 20-Minute Hat-Trick As Tottenham Tear Down Ns Mura

“I will always see Barcelona in a good way because I still see a different team,”

“Many things have changed since then.

Naturally the players are different but there is still an idea, a concept.

Iniesta is reluctant to criticise a club he still holds dear and, once his playing career comes to a close, the Nou Camp is a place he longs to return to.

“Yes, it is something I wish.”

“I would like it to happen because more than anything it is the club I spent so many years in.

“You don’t know what will happen in the future, you don’t know in what way I could return or who will be the people in charge at a certain moment.

“So there are many factors which make it hard to see what will really happen.

But if you ask me if I would like to, the answer is yes.”

Whether that is in a coaching capacity remains to be seen.

There are training centres in Japan bearing his name.

The ‘Iniesta’s Methodology’ academies, but the man himself remains unsure of what path he will take.

“Sometimes I would like to coach, sometimes I think my interests go into other directions,” He says.

“I know I want to stay in football and when I finish as a professional,

I would like to get a coaching licence, but I don’t know if I will use it in the future.

“There’s nothing where I wake up in the morning and think ‘I want to do this’.

So for now I will enjoy playing, training and will see what happens in the future.”