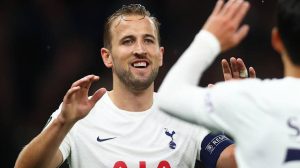 With 17-year-old forward Dane Scarlett handed his first Tottenham start with Kane on the bench.

It took the hosts just four minutes to open the scoring when Dele Alli converted a penalty.

He won after being felled inside the box by the Mura goalkeeper.

Mura gave themselves an unexpected lifeline at the start of the second half.

Read Also: Trent Alexander-Arnold Has Been Ruled Out Of Sunday’s Game Against Manchester City

When Ziga Kous struck a stunning volley past Pierluigi Gollina as Spurs allowed their performance levels to drop.

Kane, Son Heung-min and Lucas Moura were all introduced for the final 30 minutes.

As Nuno looked to up the tempo and the changes had the desired effect as Moura assisted Kane for Tottenham’s third goal of the night.

Tottenham extended their lead further when Son raced clear of the Mura defence.

After being played in behind by Lo Celso to square for Kane, who converted from close range.

Before the England captain completed his hat-trick with another neat finish minutes from the end.