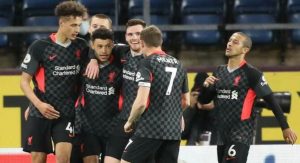 Burnley have suffered 10 defeats in 14 Premier League matches against Liverpool (W2 D2), and defeat in this match would see the Clarets lose more than 10 Premier League games against a single opponent for the first time. They have also lost 10 times against Arsenal, Chelsea and Man City.

Newcastle haven’t scored a single goal in any of their last four Premier League visits to Aston Villa (D2 L2). Their run of minutes without a top-flight goal at Villa Park stands at 377, since a Yoan Gouffran goal in a 2-1 win in September 2013.

Crystal Palace and Brentford haven’t faced each other in a league game since a January 1964 meeting in the third tier, won 1-0 by Palace with a goal from Peter Burridge.

Brighton have never lost a home match against Watford in the top-flight (W1 D3), with just five goals scored in total in these four matches (three Brighton, two Watford).

Manchester United have recovered 35 points from losing positions in Premier League games against Southampton, more than any side has against another in the competition’s history. The Red Devils 10 comeback wins against Saints is also the joint-most for one side against a specific opponent in the competition (Man Utd also 10 vs Newcastle).

In all competitions, this will be the 100th meeting between Wolves and Spurs. In their last meeting in May, Spurs won 2-0 at the Tottenham Hotspur Stadium and are looking for consecutive Premier League wins over Wolves for the first time since winning both meetings in 2003-04.

Arsenal won both of their Premier League matches against Chelsea last season, last winning three in a row against the Blues in the competition between January 2003 and February 2004.