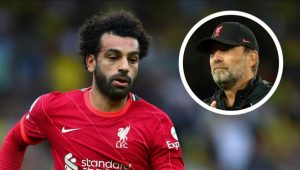 The Liverpool forward  has two years left on his current Anfield deal, but sources are confident he will agree a lucrative extension.

Jurgen Klopp has confirmed that Liverpool have opened talks with Mo Salah over a new long-term contract.

The Reds,are hoping to tie their star man down to a two-year extension, which would keep him at,

Anfield until 2025 and make him the highest-paid player in the club’s history, earning around £250,000 a week.

Salah’s current deal, signed in 2018, has less than two years left to run,

but Liverpool sources are confident an agreement will be reached, and that the 29-year-old will become the latest player to commit his long-term future,

What was said by klopp?

Speaking ahead of his side’s Premier League clash with Burnley,

Klopp was asked if he was aware of any progress between the club and Salah’s representatives.

He said: “I’m involved in pretty much everything that happens in the club.

Maybe some talks happen without me, that’s possible but I’m not sure. Apart from that I know about all things.

“It is how it always is; we don’t speak about these things.

I know we changed that a little bit with Hendo [Jordan Henderson],

but that doesn’t mean we will from now on tell you about each little step with negotiations.

“Firstly, Mo is obviously in a really, really good moment, form-wise, mood-wise, how he behaved from the first day he came back, absolutely great.

Until then it’s only important how the parties work together – and that’s not about Mo,

it’s in general. We don’t have to talk about anything else, and the decisive people can talk in the background.

“But yes, with two years left, you can imagine that there are talks. That is it.”

Earlier, Klopp had given little away when asked about Jordan Henderson’s situation,

amid reports a three-year deal had been agreed with the captain.

“No,” said a straight-faced Klopp when asked if there was any update. “Still all good.”

When subsequently asked if there was anything to be concerned about, he simply replied: “No.”

‘If there are records, Mo knows about them!’

setting two goals up and scoring one himself as Liverpool beat Norwich 3-0 at Carrow Road last weekend.

With 126 goals in 204 games for the Reds, he sits 12th in their all-time scoring list, and needs only four to move level with 10th-placed Sam Raybould.

Asked whether he used such records, or perhaps the idea that he could one day be considered the greatest forward in Liverpool history, to motivate Salah, Klopp smiled.

“I don’t have to,” he said. “He knows that. Mo is aware of all these things, and that is absolutely fine! He enjoys it.

“Breaking records is great, and the records he broke already are absolutely insane.

I obviously didn’t know last week when he scored, that he is now the first player in the history of the Premier League to score in,

five successive [opening-day] games. And there’s a reason why nobody else did it – because it’s really difficult!

“If there are any records out there, he knows about them.

And, he doesn’t have to change his style, he just has to play football, and when he plays his football,

when he works as hard as he does, there will come situations where he can score.

“With his quality, he can obviously do that, and I think he can set records with assists as well.

“I’m really happy with him, but I never told him that he could be the biggest Liverpool legend ever, or whatever.

That’s not something you go for, because people will judge you on that after your career.”