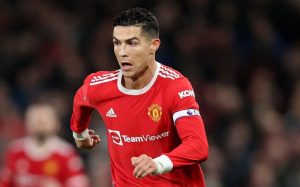 The game comes just five days after the two sides squared off in the FA Cup, with United winning that tie 1-0.

The  trio, as well as Phil Jones, all missed out on Monday through injury but Rangnick is hopeful they will be ready to return this weekend.

“I think they will be available.”

“They only trained yesterday for the first time.

Cristiano yesterday, Harry the day before yesterday. We have to wait for the final session this afternoon but as it seems right now they should be available for tomorrow [Saturday].”

This contradicts reports this morning that Ronaldo would be missing the game after being forced to leave training early.

The forward has been suffering with a hip problem of late and it was said that this was a separate issue.

Meanwhile, Sancho has been sidelined by muscular injuries.

This was the latest blow in what has been a thoroughly underwhelming start to life at Old Trafford following his move from Borussia Dortmund in the summer.

Sancho has scored just twice in 22 appearances this season and he will be hoping to boost his numbers if selected against Villa this weekend.

Maguire could also be back in the fold and is likely to be thrown straight back into the starting XI if he is passed fit to play.

The United skipper has been out with a chest injury.

Having the trio back in contention is a big boost for Rangnick ahead of what is a vital game.

Manchester United are currently seventh in the Premier League, six points adrift of West Ham in fourth but with two games in hand.