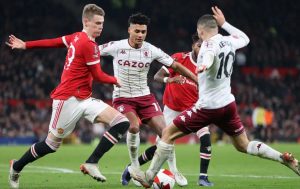 Ralf Rangnick’s side is fresh from knocking Steven Gerrard’s men out of the FA Cup courtesy of a 1-0 victory.

But, they need to drastically improve their league form to keep up with the race for European qualification, having most recently been beaten at home by Wolves in the league.

They face a Villa side who have slightly faltered in recent weeks.

Losing their last three, but they can still hold their head up high following a generally brilliant start to Gerrard’s tenure at the club.

Steven Gerrard isn’t expected to alter his side too much from their defeat at Old Trafford last time out, but he will have to make do without the suspended John McGinn.

Elsewhere, Trezeguet and Bertrand Traore will once more be absent as they represent their respective nations at the African Cup of Nations.

Meanwhile, Leon Bailey and Marvelous Nakamba remain sidelined with injury while Ashley Young represents a doubt for the hosts.

There could be a sensational debut to behold on Saturday evening,

as Philippe Coutinho may be afforded a taste of action in Villa colours while Lucas Digne looks set for a maiden start as well.

Eric Bailly is the only United player away on international duty at the moment, although Rangnick will have a few absentees.

Paul Pogba remains out of contention through injury, as does Diogo Dalot.

Phil Jones, Harry Maguire, Jadon Sancho and Cristiano Ronaldo should all be back.

The visitors will certainly have to make do without Luke Shaw and Scott McTominay, who will be out of the fold through suspension.

There have been 192 meetings between these two famous clubs, with the Red Devils predictably dominating the fixture.

Man United have won a whopping 102 fixtures between the two sides, while Villa have tasted victory just 50 times – there have been 40 draws.

The Villans have come out on top just once since the start of 2010.

And, despite Man Utd’s troublesome few years since Sir Alex Ferguson’s retirement, have lost to the Red Devils nine times in the previous 12 encounters since the beginning of the 2013/14 campaign.

Although United resumed normality by beating Saturday’s hosts in the FA Cup in midweek.

Considering the two sides have just met and we’re not expecting wholesale changes by any means, this game should be straightforward to predict on paper.

With the home supporters behind them, however, Villa should be able to hurt United even more than they did at Old Trafford during the week.

The visitors are stacked in individual quality, though, and have the personnel to again flatter to deceive by picking up some sort of result.

While Rangqnick’s side is in massively underwhelming form, it’s a huge opportunity for Villa to achieve a historic double over United, but they might have to settle for a point here instead.