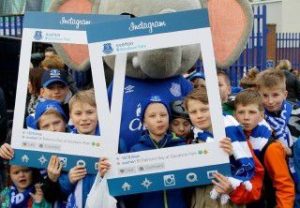 The south coast club just make the cut, which is more than we can say for fellow top-flight sides Burnley (448k), Norwich (433k) and Brentford (210k).

It’s an instant return to the top flight for the Blades who still harbour Championship play-off hopes.

United still lag behind their most popular player, however.

Pressing for promotion to the Premier League, the Cherries would be there (but in a relegation spot)

The place to come if you want to see which fingers Emiliano Marcondes uses to celebrate a hat-trick (clue: not the ones you’d expect).

Another Championship team well placed for a return to the top flight, Fulham are just 4,000 followers clear of Bournemouth.

If you want more Fulham content, check out left-back Joe Bryan who is going for the intelligent soccer player look by not only wearing glasses but, shock, reading books.

Something of a disappointing showing from the Mighty Whites but one that replicates their current league placing.

Another ‘big’ club who are struggling down the lower reaches of the top flight when it comes to Instagram followers.

Newcastle have actually seen an increase of 250,000 since their Saudi-backed takeover.

And judging by their recent post, Chris Wood is a lot taller than you think he is.

A decent showing from the Saints. And you can’t beat a Peep Show reference.

A following entirely made up of former managers.

Twelfth in the Premier League table, 12th in our standings, maybe there is something in an Instagram-based table after all.

Villa fans are still harking back to the glory days of 2003 when they had more Myspace followers than Manchester United. Probably.

Nevertheless, they’ve enjoyed a significant upsurge this season, helped no doubt by the appointment of Steven Gerrard (9.6m followers) and signing of Philippe Coutinho (23.6m).

Everyone’s second favourite club, they will be disappointed to see themselves below Wolves when it comes to Instagram popularity.

Jarrod Bowen’s romance with Dani Dyer might help their figures, however.

The daughter of the EastEnders actor whose name escapes me, she boasts 3.4 million Instagram followers.

The Wolves brand obviously helps when it comes to ease of location on Instagram.

The club lag a little way behind winger Adama Traore, however, whose posts mostly consisting of him with a vest on have amassed 2 million followers.

He’s not their most followed player, though.

Even among the club’s 2.5 million followers, it’s impossible to find one who thinks Rafael Benitez should stay.

It’s not all bad news for Rafa, though.

He has his own fanpage on the platform. Boasting a grand total of 149 followers, even they’ve had the good sense not to post anything since he took over at Goodison.

The acquisition of the club by Thai-based King Power and subsequent Premier League title in 2016 has seen the Foxes popularity soar in soccer-mad Thailand and that is reflected in their Instagram following.

Despite Tottenham coming in sixth, they trail some way behind the other ‘Big Six’ clubs.

Interestingly, while Tottenham have close to 12 million followers, former Spurs player Gareth Bale has 45.7 million. Presumably for his golf content.

There is some leap between Spurs in sixth and Arsenal in fifth, with the Gunners boasting nearly twice as many followers as their north London rivals.

Their most popular player on Instagram is Pierre-Emerick Aubameyang, who isn’t doing himself any favours when it comes to salvaging his reputation.

A Champions League berth only for the current Premier League leaders who refreshingly give equal billing to their women’s side.

Another team whose position mirrors their Premier League standing, Chelsea are clearly benefiting from Chelsea Clinton’s lack of Instagram presence (she has 3 million Twitter followers).

Just like their manager, Liverpool’s Instagram is pretty in your face when they win and quiet when they don’t.

Thankfully, the fact that they win more often than not has helped them amass close to 35 million followers.

Top of the league. United’s first accolade under Ralf Rangnick and one that will be celebrated long into the night (if United fans can remember how to celebrate that is).

Their followers pale into insignificance when they are compared to their star player, however.

It’s clear to everyone, however, that it is another Manchester United legend in Roy Keane who should be leading the way.