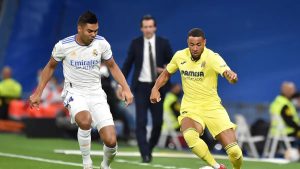 Real Madrid missed the chance to go five points clear at the top of La Liga as they were held to a goalless draw at home by Unai Emery’s Villarreal.

Carlo Ancelotti’s team with the opportunity to extend their advantage over their rivals,

but they could only claim a draw to move three points ahead.

Villarreal dictated much of the first half as Real Madrid struggled to get hold of possession.

Paco Alcacer could have opened the scoring,

butwas thwarted by Thibaut Cortois who was called upon more than once in the opening period.

Eduardo Camavinga was introduced at the break to change the match for the home side,

and there was improvement in Real Madrid’s play.

But, Villarreal still carried a goal threat on the counter attack.

Carlo Ancelotti also substituted EdenHazard and Isco on as RealMadrid looked for a way through.

However, it was the two goalkeepers – Thibaut Courtoius and Geronimo Rulli

who shone brightest as the two sides settled for a point apiece.