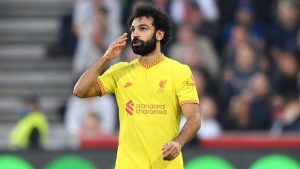 The Egypt forward put his side 2-1 ahead in the second half to overtake Roger Hunt as the quickest Red to make his century.

Mohamed Salah has become a firm favourite at Anfield since arriving at the club from Roma in 2017.

And he came through once more to help his side out of a tight situation,

with a spot at the top of the Premier League on the line.

However, newly promoted Brentford spoiled the landmark finish with an 82-minute goal from Yoane Wissa to level the score.

Mo Salah puts Liverpool in front and becomes the fastest player to reach 100 top-flight goals for the club, in 151 games! 🔴

He has also moved into the top 10 @LFC goalscorers of all time.

His century arrived in just 151 games, quicker than any other Reds player.

Club legend Roger Hunt was the previous record-holder, having made 100 in 152 appearances.

He is also only one of four Liverpool players to have netted 100 times in the Premier League,

alongside Michael Owen, Robbie Fowler and Steven Gerrard, and also entered the club’s list of top 10 all-time scorers with this latest strike.