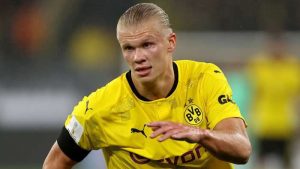 John Arne Riise wish Liverpool could able  to sign Erling Haaland. But, fears he would make Manchester City “close to unbeatable”, should Pep Guardiola’s side land the Dortmund striker.

The Dortmund star is attracting the interest of all of Europe’s top clubs.

Haaland, it is understood, has a release clause which would enable him to leave,

“Obviously I would love to have him at Liverpool.

Because, he’s an unbelievable player.

“He’s in great form, and I think he would suit [Jurgen] Klopp’s style of football

. I also think he would love Liverpool as a club.

“But if City got him, wow! You talk about unbeatable teams, then that would be close!

“Whoever gets Haaland, whether it’s next season or whatever, is going to be an unbelievably strong team for many years to come.

“I don’t know if Liverpool have the chance to sign him, but if they do then please do.

Because that would be unbelievable for the club – or for any club that signs him!”

Haaland’s form over the past few years has been remarkable.

Since moving to Dortmund from Salzburg in January 2020.

He has scored 68 goals in just 67 appearances, establishing himself as one of the world’s most sought-after players.

Riise, who spent 10 years in the Premier League with Liverpool and Fulham.

Believes England is the logical next step for his countryman, despite reported interest from Real Madrid, Paris Saint-Germain and Bayern Munich.

“Norway has been lacking players in the Premier League in the last few years.

Ten or 15 years ago, we had so many players, now there are very few and not many have made a good impression.

“I’m glad that [Martin] Odegaard is at Arsenal and looking good.

Hopefully he will have a good season. But we need a few more players up there,

And challenging and really making a name for themselves, just so Norwegian football can get back to what it used to be, with players playing in top leagues.

“I hope Haaland comes to the Premier League.

I hope he comes to Liverpool, obviously, but for Norwegian football it is important to get a player like that in the Premier League.”