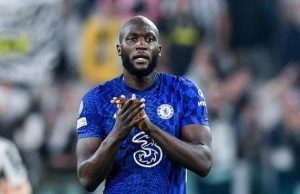 Chelsea striker Romelu Lukaku has apologised to the club’s supporters for the ill-advised comments in an interview with Italian media that led to him being dropped for the draw against Liverpool.

The Belgian became Chelsea’s record signing when he returned to the club on a five-year deal in a £97.5m move from Inter in the summer.

However, he has struggled at times this season, going on a seven-game barren run before having his comeback disrupted by injury and Covid-19.

Speaking to Sky Italia in an interview that was conducted weeks ago but only broadcast last week.

Lukaku revealed he was unhappy with his adaptation to Thomas Tuchel’s tactical system.

Also confessed his love for former club Inter – going as far to say he would like to return to San Siro while still at his peak.

With Chelsea in the midst of a spell of torrid form and losing ground in the title race.

The honest but ill-timed interview caused a furore behind the scenes at Stamford Bridge,

and Tuchel decided to drop the 28-year-old for the crunch Premier League clash against Liverpool on Sunday – a match that ended 2-2.

The head coach confirmed Lukaku had apologised to him and his teammates on Tuesday.

And the same evening Chelsea shared their own interview with the player, where he took the opportunity to pay his dues to the club’s support.

“To the fans I’m sorry for the upset that I’ve caused.”

“You guys know the connection that I’ve had with this club since my teenage years.

I totally understand you guys being upset.

“Obviously it’s up to me now to restore your trust and I’ll do my best.

Show commitment every day on the training ground and in games, trying to make sure that we win games.

“Also to the manager I apologise, and to my teammates and the board.”

“Because it was not the right moment, and I want to move from this and make sure we start winning football games and that I’m performing for the team in the best manner.”