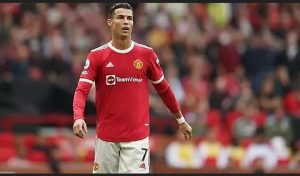 Manchester United’s signing of Cristiano Ronaldo last summer had many expecting the Red Devils to accomplish big things in the 2021/22 season, although it hasn’t quite been working out that way so far.

The debate over whether Ronaldo has even had a positive overall impact on the club.

Despite his goals, is an ongoing one in England, and former Manchester City player Trevor Sinclair made his feelings clear on the matter.

Sinclair believes Ronaldo isn’t as focused as he should be on on-field matters and advised him to keep quiet and focus on football rather than all of the other issues surrounding the club.

“I’m starting to think that Manchester City dodged a bullet by not signing Cristiano, I really think that.”

“You look at some of the players that are struggling for form at Manchester United,

“Of course you can [blame Ronaldo]. Know your role, you’re a footballer, you’re hired by the football club.

“Keep your mouth shut because at times that’s the best thing to do.

He’s causing a lot of problems at the football club.

“Not just his lack of goals in recent times, but the fact that Ole [Gunnar Solskjaer] has gone and Michael [Carrick] went in and dropped him for a game.”