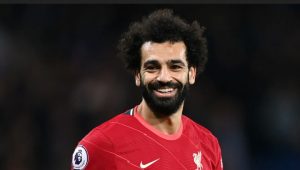 Mohamed Salah has confirmed that he wants to stay at Liverpool but also insisted that his future is not in his own hands.

Salah’s current deal is set to expire at the end of next season and talks over a new contract are yet to bear fruit.

Both parties are thought to be eager to hammer out fresh terms, with Reds manager Jurgen Klopp calling for patience on more than one occasion this season.

Klopp said back in December.

“We are talking. Extending a contract with a player like Mo is not a thing you do and you meet for a cup of tea in the afternoon and find an agreement.

“That’s completely normal. There’s really nothing else to say about [it]. Mo speaks about it when he gets asked about it.

I can only say a few things because all the rest is not for the public obviously.”

Now, Salah has provided his own update on the situation during an interview with GQ.

“I want to stay, but it’s not in my hands. It’s in their hands,” he said. “They know what I want. I’m not asking for crazy stuff.”

Liverpool will be desperate for a breakthrough in talks soon with Salah performing at a world-class level for a number of years now.

The 29-year-old enjoyed a wonderful 2021, finishing seventh in the Ballon d’Or rankings and also being among the three nominees for the Best FIFA Men’s Player recently.