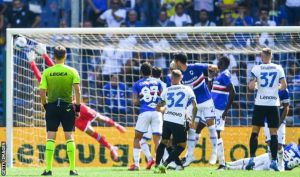 Lautaro Martinez then delightfully finished off a slick counter-attack for Inter on the stroke of half-time,

before Tommaso Augello smashed in a left-footed volley after the break.

On Saturday, Napoli maintained their 100% record by beating winless Juventus,

who were playing their 2nd game since the departure of forward Cristiano Ronaldo to Manchester United.