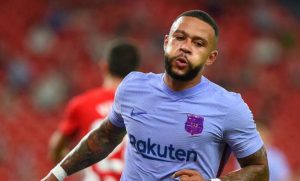 after the departure of Lionel Messi to Paris Saint-German in August.

Depay joins Ronald Koeman’s side from Lyon on a two-year contract and he has,

instantly established himself as one of their key players.

Following his impressive pre-season outing with the Blaugrana, Depay has contributed two goals,

and an assist in Barca’s first three La Liga matches of the season.

The four-time African Footballer of the Year disclosed that Depay’s previous experiences,

at Lyon, Old Trafford and PSV would be of advantage to Koeman’s team.

“The luck that Barça has had is that he has signed Memphis,”

“He has important club experience, he has shown that he can put the team on his back,

and I think it will be him [the new leader].”

in the world because of the presence of the “best two clubs in the world”.

Eto’o spent the majority of his career in Spain and during his stay at Barcelona,

“We have a lot of teams, including two of the best in the world and any player dreams of playing in those teams,”

Meanwhile, the Cameroon legend – who started his professional career at the Santiago Bernabeu,

picked two Real Madrid players and an Athletic Bilbao forward as his favourite players for the 2021-22 campaign.

when asked about his favourite players in the division.