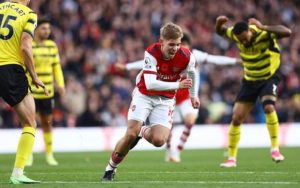 Arsenal young star  Smith Rowe earned England  called up for the first time for the World Cup qualifiers with Albania and San Marino.

Southampton’s Ward-Prowse is ill while Rashford will focus on his fitness after returning from a shoulder injury.

The arrival of Chelsea’s Mount has been delayed by dental surgery.

England Under-21 international Smith Rowe, 21, has impressed for Arsenal this season and has scored in his past three Premier League games.

It is the first time he has been called up to Gareth Southgate’s senior squad.

England play Albania at Wembley on Friday before rounding off their qualifying campaign away to San Marino on 15 November.

They require four points from those games to qualify for Qatar 2022.