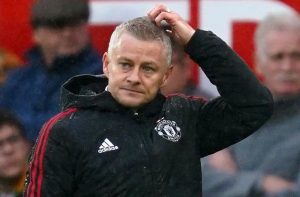 Manchester United fall behind against their city rivals during the weekend match. Despite that, Man Utd have no plans to replace manager Ole Gunnar Solskjaer

There is no any sign from the club that the Norwegian will lose his job.

Solskjaer is expected to be in charge for their next Premier League game against Watford.

Meanwhile, a number of United players have reservations about whether Solskjaer is the right man to turn things around at Old Trafford.

After successive home defeats to rivals Liverpool and Manchester City.

The squad are understood to want Solskjaer to succeed, given his status as an ex-player.

But the two recent losses have led to some players being concerned about the tactics being deployed.

Solskjaer, insisted after the game that he is not on borrowed time, stating:

“No, I don’t start to feel like that. I have good communication all the time with the club that’s very upfront and honest about the situation.

“I’m sure when we come back the players will be fresh in their minds from internationals.

And of course the demands on the players, on me, are going to be high.

“We’ve just got to get back to what we started to look like and what we were for a while.

We’ve got the players to do that.

“We’ve been through this a few times. Since the last game we played here [Liverpool defeat].

It’s been a very difficult period and we’ve gone away from what we used to be.

We need to be on the front foot more, I can’t look at myself and say this is the way I want Manchester United to play.”