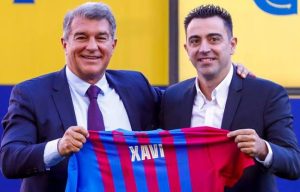 The Blaugrana hoping that the legendary former midfielder will be able to reverse their fortunes.

In a press conference that lasted over an hour, Xavi discussed his footballing philosophy and the values.

He wants to instil in this Barcelona side, as well as his aim to assist with the development of young players.

“I come here to help the [youngsters] to perform, to be happy.”

“We count on everyone. We want to see them all and [help them] perform in training.

“They are very young. Nico, Gavi … it is difficult to understand how they put in this [level of] performance at this age.

You have to help them perform in each game. Each match is a final exam.”

Xavi went on to stress that he maintains a good relationship with Barcelona veterans and claimed that he expects them to lead the way.

“I have a very good relationship with [the veterans],”

“I have a direct relationship with them and I have already spoken with some.

They have to lead the way in important moments.

They have to lead the team. We have very young players. We will give them power in the dressing room.

“The plan is the same as for all the players. They all start from scratch. The ones I know, are precisely the ones whom I will push the most.

“I want them to lead the dressing room and they are very important because they have experienced many situations.

I know their strengths and weaknesses. I have no problem. I consider it an advantage.”

The former Al Sadd coach also discussed the football philosophy his coaching staff are hoping to impose on the team upon their arrival.

“More than the system, it is the model, the idea.”

“At Al Sadd we played 3-4-3 because we were very dominant. It will be different here.

“In the end, it’s Cruyff’s idea. My first defender is the striker and the first attacker is the goalkeeper.

You have to work tactically, know what to do on the field in different situations.

“We will tell those who are there what the idea is, what the rules are. We have a plan so that the footballer can perform.

I have everything planned until the Espanyol game. The method, the idea and the game model are explained.

Xavi explained why he turned down Barcelona’s offers to take charge of the team in the past and broke down the reasons behind his decision to join the club now.

“The first two times that Barcelona approached us, we did not feel it [was the right moment], both at a family and football level,” stressed Xavi.

“I also believed that it was early. Then, with elections in between, it did not seem like the right moment.

Xavi mentioned that he would like to have coached some of the superstars of old but that his intention now is to assist the new generation.

“Messi sent me a message wishing me luck. We can no longer think about the players we don’t have.”

“We [need to] understand [our style] as a positional game. We can change the system.”

“We want to be aggressive, intense, put pressure in the opponent’s half. [To] go out to win.”

Xavi has had several great mentors throughout his career, like Louis van Gaal, Pep Guardiola and Luis Enrique and believes he has taken lessons from all of them.