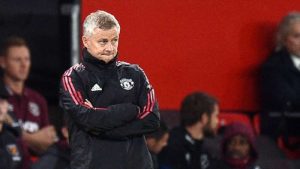 Manchester United manager Ole Gunnar Solskjaer hinted  his side are not getting penalties due to comments by Liverpool boss Jurgen Klopp.

Klopp suggested United recieve  number of spot-kicks in comparison to his Liverpool team.

“I hear now that Manchester United had more penalties in two years than I had in five and a half years.”

Solskjaer was asked if he was concerned United would not get as many penalty decisions now Cristiano Ronaldo was back in the league.

“There was a certain manager last year who was starting to worry about us getting penalties.”

“After that, it seems like the decisions are more difficult to give.”

Solskjaer felt his side were denied

While he also felt his side should have had a spot-kick in a Carabao Cup defeat by the Hammers on Wednesday.

Klopp made his comments after a 1-0 defeat against Southampton last season,

in which he felt his side should have been awarded a penalty.

“Surely I’ve seen a big, big difference since then on,” added Solskjaer.

“But we just have to leave it up to the refs and hope that they will make the right calls very soon.”

Since Solskjaer took over in December 2018.

United have been awarded 49 penalties to Liverpool’s 22 in all competitions.

United, who are level on 13 points with Liverpool after five top-flight games,