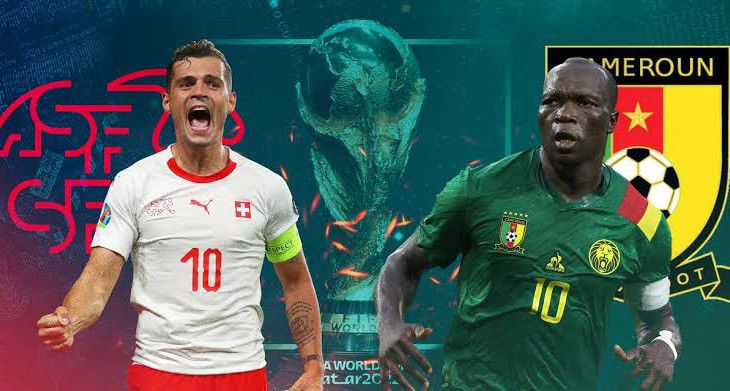 Switzerland and Cameroon will meet for the first time ever Today as both will be hopeful of progressing from a tough group that also includes Brazil and Serbia.

Switzerland hoping their star goalkeeper is fit to start.

Murat Yakin’s Swiss side will be captained in Qatar by Granit Xhaka and possesses plenty of international experience, with particular strength defensively.

Yann Sommer is set to be fit to start in goal after overcoming his ankle injury to give Yakin a timely boost ahead of the tournament.

Switzerland were beaten by Ghana last week in a warm-up fixture, with a back three utilised,

though may return to a more familiar defensive four for their World Cup opener.

Denis Zakaria, seldom sighted during his loan at Chelsea this season, may find it tough to force

his way into a competitive midfield, while Breel Embolo is likeliest to start up front as Switzerland seek a more consistent attacking output.

Cameroon: prepared for the World Cup with a 1-1 draw against Panama last Friday.

Now back under the management of Rigobert Song, they arrive at this tournament with few major injury concerns,

though there have been questions raised about possible interference from above in Song’s 26-player selection for the campaign.

Still, it looks a strong squad, with midfielder Andre-Frank Anguissa likely to play a key role after an excellent start to the season at Napoli.

Brentford’s Bryan Mbeumo was a French youth international but opted to play for Cameroon,

the country of his father, during the summer, and is competing for a spot in the forward line with plenty of options at Song’s disposal.