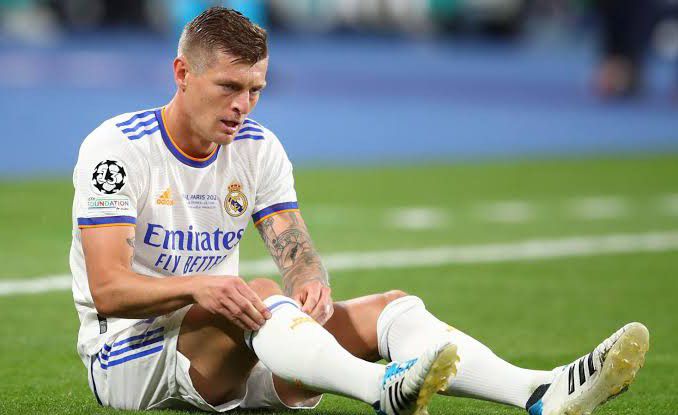 Former Bayern Munich star Toni Kroos was sent off for the first time in his career at the weekend after being booked twice against Girona.

The Real Madrid midfielder will hope it doesn’t happen again before he retires, whenever that might be.

Kroos isn’t sure how much longer he will carry on playing, but he is convinced that he will end his career as a Real Madrid player.

At the press conference ahead of the Champions League game against Celtic, he was asked about his future.

“I don’t even know myself what will happen. We’ll decide before March, so that you don’t all get too nervous.

“I’m going to retire here, what I don’t know is when. There’s nothing new to tell.”

Real Madrid must beat Celtic on Wednesday to keep matters in their own hands and guarantee first place in the group.

Read Also: Champions League last-16 Draw: Date And All You Need To Know

After two games without a win, the whole squad will be itching to bounce back, even if some have suggested certain players need a break.

“I can only speak for myself.”

“I’ve got a rest coming up [because of the suspension] so that helps me not to worry about tiredness, but I’m feeling good physically.

“People are only talking about [the calendar and tiredness] because we have gone two games without winning.

Before, no one was talking about it.”

The packed schedule affecting most clubs right now is largely thanks to the Qatar World Cup which is just a few weeks away.

Kroos will not be there with Germany given he has retired from international football, but he cannot choose between club success and international glory for his country.

“That’s very tough. The World Cup is played every four years and you can only play in two or three, but I’m not going to choose.”

“They are very special moments.”