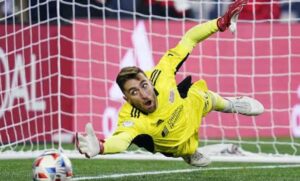 Matt Turner is adamant he will not just be making up the numbers when he joins up with Arsenal ahead of next season.

The 27-year-old goalkeeper will make the move from New England Revolution in the summer.

After a deal was reached with the MLS side worth around £5million, which could rise with add-ons and also includes a 10 per cent sell-on fee.

With Bernd Leno expected to leave the Gunners at the end of the season.

Turner will likely find himself as back-up to Aaron Ramsdale who has been one of Arsenal’s best players this campaign.

However, Turner is not planning on just settling for a place on the bench and the occasional cup appearance.

“When I got my first chance with the national team, it was only as a No. 3.”

“No one ever really took me seriously, so I’m not going over there just to collect a cheque and ride off into the sunset.

Matt Turner has become his national side’s starting goalkeeper, getting the nod more and more ahead of Man City stopper Zack Steffen.

When the time comes in the summer, Turner reveals it will be a dream to challenge himself in north London, even if he first became aware of Arsenal in slightly unusual circumstances.

“Both of my older sisters, they played for a club called the Pascack Arsenal.”

“And when I was getting into soccer after the 2010 World Cup, when I’m on FIFA, I’m looking at the first team in the Premier League is Arsenal, and I said, ‘Oh, that kind of makes sense.”’

“You dream. You don’t really see a clear path of how it’s going to happen.”

“But you just trust the work and trust your dream every single day, and continue to work hard, be self-aware, know what you need to work on, and listen to your coaches around you.”

“I understand that it’s really challenging to get your foot in the door.”

“So it’s really hard to say no to not only the chance to go fulfil a dream,

but also to go challenge myself at the highest level and play for one of the biggest, most recognisable brands in the world in Arsenal.”