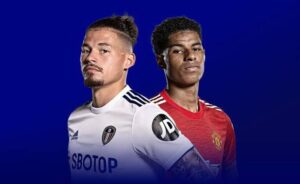 Manchester United are looking to build on their midweek win over Brighton as they travel to rivals Leeds United on Sunday.

Victory over the Seagulls ended a poor run of three games without a victory for Ralf Rangnick’s side,

who climbed back into the top four, albeit having played more games than several of their rivals for a Champions League place.

Leeds united are in need of points for a very different reason, having suffered damaging defeats to relegation rivals Everton

and Newcastle in recent weeks, and are about to embark on a tricky run of fixtures, with Liverpool and Tottenham to come after this.

Junior Firpo is back in training for Leeds but versatile midfielder Stuart Dallas is expected to miss out after limping off early in the defeat to Everton.

Man United have been boosted by the returns to training of Edinson Cavani and Raphael Varane after both missed the Brighton win, but Nemanja Matic remains out.

Head to head (h2h) history and results
Premier League only.

Neither side have defended especially well of late and both show plenty of ambition going forward,

even if United haven’t scored the goals to go with it in recent weeks. We fancy a thriller.