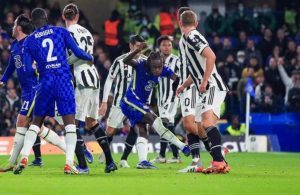 Chelsea boss Thomas Tuchel said his side produced an “amazing performance” as the holders progressed to the last 16 of the Champions League with an impressive win against Juventus at Stamford Bridge.

Trevoh Chalobah, who was making his first European start for the Blues, scored the opener before Reece James controlled a clearance and volleyed across Wojciech Szczesny to give Chelsea the advantage their dominant performance deserved.

A third soon followed with Juventus looking shell-shocked as a short, sharp interchange of passes gave Callum Hudson-Odoi the chance to slot home at the back post.

The scoring was completed when Hakim Ziyech capitalised on a mistake from Juve midfielder Weston McKennie to cross for Timo Werner to tap home in added time.

It is the Italian club’s heaviest defeat in the Champions League and demonstrated Chelsea’s status as a serious contender to retain the trophy they won against Premier League rivals Manchester City in May.

The three points send Chelsea to the top of Group H but they must match Juventus’ result in the final matchday on 8 December – when they travel to Zenit St Petersburg and the Turin club host Malmo – in order to stay there.

Tuchel, who has claimed 35 wins from 50 games as Chelsea boss, said the performance was “sharper” than the 1-0 defeat the Blues suffered in Turin in September.

Chelsea dominated that game, having 73% possession and 16 shots, but only had one effort on target and were undone by a Federico Chiesa strike 10 seconds after half-time.

“We took more risks – that was something we lacked in Turin.”

“By control you cannot hurt them – you need to penetrate with runs off the ball.

“It’s so tough to create and score but we created so much. An amazing performance and a fantastic result.”

The only concern for Tuchel and Chelsea were the withdrawals of N’Golo Kante in the first half and Ben Chilwell in the second period through injury, with the Blues playing Manchester United on Sunday (16:30 GMT).