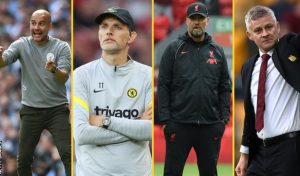 £1bn between them this summer but, who will be happiest now.

Much is expecting from Man Utd

Manchester United have not held back in this window, saving the most thrilling,

addition until last with the return of Cristiano Ronaldo to Old Trafford after 12 years away at Real Madrid and Juventus.

Manager Ole Gunnar Solskjaer has been given the sort of financial backing that demands United rival Manchester City,

Liverpool and Chelsea for the title. No excuses now.

Jadon Sancho is an exciting attacking signing at £73m while Raphael Varane, brought in from Real Madrid,

in a deal that could be worth £42m, demonstrated his defensive authority amid the chaos of a winning debut at Wolves on Sunday.

And yet, have these eye-catching deals only covered up a glaring weakness,

that Solskjaer and United have failed to address – namely that they desperately need more quality in midfield?

United have certainly thrown their weight around in the market and Ronaldo is a huge,

coup but doubts remain about whether they have done enough to be serious title challengers.

Can Man City retain the league without a main striker?

Manager Pep Guardiola and his players did just that last year, with Sergio Aguero often missing,

so who would seriously bet against Manchester City doing it again this season?

City spent £100m on British record signing Jack Grealish to give them another point of creativity,

but, there was disappointment in their lengthy pursuit of Harry Kane, who is staying at Spurs,

and the link with Cristiano Ronaldo ended with Manchester United’s declaration of interest.

If one team, one squad, can pull this off, it is Manchester City – with Grealish adding an attacking X- factor.

But there is no doubt the acquisition of Kane would have made them firm favourites to retain their title.

Thomas Tuchel’s European champions are in perfect shape to go for the Premier League title.

Romelu Lukaku was the showpiece signing, the striker who will really make the difference at £97.5m,

and Fikayo Tomori to AC Milan for around £24m. It has been a smart summer.

Chelsea could not prise defender Joules Kounde out of Sevilla but they have had a,

superb window – and a squad that can challenge on all fronts.

There was a fair amount of social media angst among Liverpool fans about their lack of deadline-day activity,

which was mainly confined to the announcement of a new contract for captain Jordan Henderson.

Perhaps it was the big spending of rivals such as Chelsea, Manchester City and Manchester United that increased the anxiety.

But, manager Jurgen Klopp has never been a man to throw money around in a panic,

and that suits the well-honed financial model of Fenway Sports Group, the club’s American owner.

as one for the future, but the idea that Klopp or FSG would enter the race for, say, Kylian Mbappe came from the realms of fantasy.

In this instance, Liverpool’s fans should trust the manager who has brought the,

Champions League and a first league title in 30 years to Anfield and a squad bolstered by the return to fitness of world-class talent such as Virgil van Dijk.

Read Also: • All The Deals Agreed On Transfer Deadline Day

Benitez on a tight budget

Rafael Benitez has spoken on many occasions about Everton’s ambition since,

he became the most controversial managerial appointment in the club’s history.

It is an ambition that has been well hidden in the summer transfer market.

Former Liverpool manager Benitez has only been given £1.7m to pay out on Demarai Gray,

who has made an outstanding impression since signing from Bayer Leverkusen,

as Everton pull in their horns after years of scattergun spending.

The other deals Benitez has done have all been free transfers – such as keeper Asmir Begovic,

and two players he knows well from his time at Newcastle United in Andros Townsend and Salomon Rondon.

Director of football Marcel Brands has shipped Moise Kean back to Juventus,

on loan but failed to find a buyer for James Rodriguez, who is not in Benitez’s plans and who will now be an expensive item on Everton’s wage bill.

Porto were reluctant to take Rodriguez, scuppering a potential move for his fellow Colombian, the exciting winger Luis Diaz.

The problem of finding a long-term successor to captain Seamus Coleman remains unresolved.

Benitez has made a highly impressive start, winning two of his first three Premier League games,

and also receiving a very warm reception from Everton supporters before his first game at Goodison Park against Southampton.

Everton will rely heavily on his expertise with a thin squad – and any judgement on what,

he does for now must be placed in the context of his lack of spending in the summer window.

In addition to Chelsea’s outlay, there have been plenty of other deals done by London’s Premier League clubs.

Arsenal’s heavy spending, and miserable start, has ensured there is a spotlight on them for all the wrong reasons.

The Gunners spent more than £100m, yet are bottom of the Premier League after three matches.

Mikel Arteta was certainly busy in the market. Ben White has been the big defensive buy at £50m from Brighton,

but has been out after testing positive for Covid-19. Midfielder Martin Odegaard is back from Real Madrid on a permanent basis.

Goalkeeper Aaron Ramsdale has arrived from Sheffield United, and Japanese defender Takehiro Tomiyasu has come in from Bologna.

But has Arteta made a real game-changing signing? Early evidence suggests not.

A lot rests on that verdict being a hasty and incorrect one.

Spurs have done great business in tying Son Heung-min to a new contract while Kane will guarantee goals, now he is staying.

New boss Nuno Espirito Santo sits at the top of the table having brought in defensive powerhouse Cristian Romero from Atalanta,

It took a while for things to get going at West Ham but manager David Moyes will be happy that he can build on his outstanding work, which took them to a sixth-place finish last season.

and added another to his Czech contingent with a loan deal for international midfield man Alex Kral from Spartak Moscow.

West Ham’s manager deserved strong backing after doing so much for the club – and he got it in the latter days of this window.