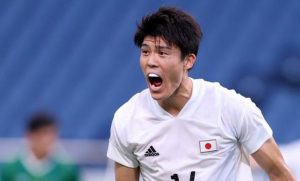 while Hector Bellerin joined Spanish side Real Betis on loan.

Tomiyasu, 22, who can play at either centre-back or right-back, has been signed for £16m on a four-year deal.

He made 31 Serie A appearances last season but has featured just once for Bologna this campaign.

“Takehiro is a strong defender with good experience in Serie A and at international level.

“He is a versatile defender with great defensive qualities, high technical ability,

and composure on the ball. He will be an important member of our squad.”

Calum Chambers and Cedric Soares have started at right-back in the north London,

club’s three league games this season, all of which have ended in defeat.

Bellerin has not been a regular starter for the Gunners since suffering a serious knee,

injury in 2019 but made 25 Premier League appearances last season.

The 26-year-old Spain international, signed from Barcelona’s academy in 2011,

has yet to feature for the club in this campaign and has two years left on his current contract.

The England Under-21 international spent 2018-19 on loan at Hoffenheim in Germany.

“Feyenoord is a wonderful club and a great challenge for me. I hope I can get the fans cheering soon.”

Arsenal have recruited heavily this summer with buys such as centre-back Ben White for £50m,

midfielder Martin Odegaard for £30m and goalkeeper Aaron Ramsdale for an initial £24m.

• All The Deals Agreed On Transfer Deadline Day

The England international thought he was going to join Everton on loan before the transfer window closed.

However, Arsenal refused to sanction the move which triggered a social media post from Maitland-Niles, saying ‘he just wanted to play’.

It is understood the 24-year-old spoke to Arteta about his frustrations on Tuesday afternoon.

The talks went well and Maitland-Niles will now remain at Arsenal.

He has made two appearances for the club this season, coming on as a substitute in Saturday’s 5-0 defeat at Manchester City.