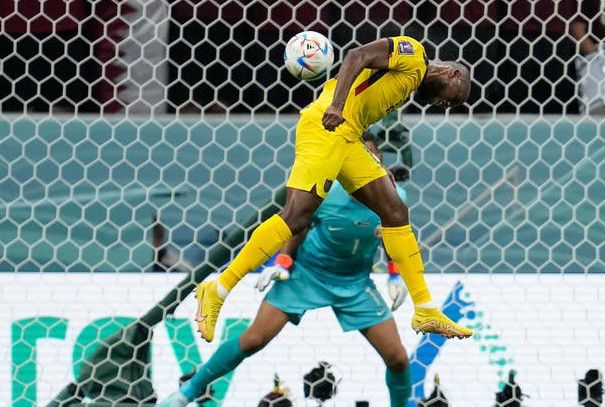 Qatar became the first hosts to lose their opening game of the tournament, falling 2-0 to Ecuador at the Al Bayt Stadium.

A brace from Enner Valencia was enough to start the South Americans’ campaign perfectly,

as they ran out comfortable winners in a dominant display.

Despite the partisan atmosphere, the Ecuadorians were calmness personified in possession, dictating the tempo under next-to-no pressure from the Qataris.

as Gustavo Alfaro’s side threatened to rack up a cricket score, but they kept the scoring down as they eased down to preserve themselves for tougher fixtures ahead.

For Felix Sanchez’s Qatar, it is – and they got off to – the worst possible start.

Valencia thought he had opened the tournament’s scoring inside three minutes,

nodding in from close range after a penalty box melee from an Estupinan free-kick, but VAR mysteriously disallowed the strike on the grounds of a very dubious offside.

On 16 minutes, however, the Ecuadorians got justice, as nervy home goalkeeper Saad Al-Sheeb felled the onrushing Valencia, conceding a penalty.

The former West Ham and Everton striker converted confidently, and he doubled his side’s lead just after the half-hour,

as he glanced a header into the far corner from an Angelo Preciado cross to put the game beyond the hosts.