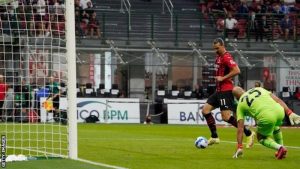 And, Maurizio Sarri ran onto the pitch to remonstrate, earning the Lazio coach a red card.

Roma boss Jose Mourinho’s 1,000 game in management ended in victory after an injury-time winner against Sassuolo.

Stephan El Shaarawy scored in the 92nd minute to maintain his side’s 100% record this season.

Roma are top of the table ahead of Milan and Napoli on goal difference.

The former Manchester United, Barcelona, Inter Milan and Juventus striker had been out since May.

Because of a knee injury but has now scored in 24 different league seasons, dating back to the 1998-99 Swedish league.

Read Also: Karim Benzema Fight Back With A Hat-Trick To Help Madrid Thrashed Celta Vigo In Their First Game At The Bernabeu In 560 days

“Ibrahimovic never gets old and he has great passion, a fire burning inside him,”

“He competes to win, he always trains to the maximum.

He does so with pleasure. When you are like that you do not feel the years go by.”