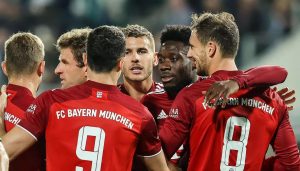 Bayern Munich continuing their stellar start to the season as they won 3-1 at the Bundesliga’s basement dweller Greuther Furth despite playing with ten men for half the match.

Thomas Muller and Joshua Kimmich scored with typically precise finishes in the first half.

But three minutes after the interval the underdogs were given a boost when,

Benjamin Pavard was sent off for lunging into a challenge on Julian Green on the edge of his penalty area.

Greuther created few chances though, with Bayern stretching their lead further when,

Kimmich’s cross was diverted into his own net by Sebastian Griesbeck under pressure from Robert Lewandowski.

The failure for the Bayern number one to score was, along with Pavard’s expulsion.

The downside to the Bundesliga leaders’ win, as he failed to equal Gerd Muller’s record of scoring in 16 straight Bundesliga games.

Greuther pulled a goal back in the 88th minute thanks to Cedric Itten’s close-range header,

but that was as good as it got for the hosts, who remain at the foot of the table with one point.

Bayern remain top with 16 points and 23 goals from six games.