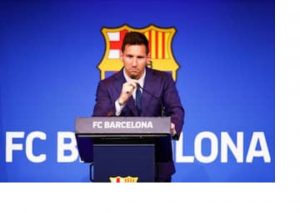 Lionel Messi has finally left Spanish giants Barcelona in a stunning development that no fan of the Catalans saw coming and he is now in the verge of making a move to Paris Saint-Germain.

Before his departure at the Nou Camp, Lionel Messi netted 672 goals in 778 games for Barcelona and he remains the club’s highest goalscorer ever in history.

Apart from netting great goals, Lionel Messi also got many against top teams in the Spanish La Liga and also in the Champions League.

Teams like Real Madrid, Manchester United, Chelsea and others conceded goals against Lionel Messi as they were unable to stop the Argentine footballer.

However, there are some clubs Lionel Messi failed to score against despite how good the Argentine is as these sides clipped the wings of the six-time Ballon d’Or winner.

According to the report on Sportbible, only eight teams prevented Lionel Messi from netting against them so far in his professional football career.

What is the names of the of these 8 teams?

Earlier, Legit.ng had reported how Lionel Messi could be on his way to joinPremier League giants Manchester United this summer as the Old Trafford landlords are ready to hijack his move to Paris Saint-Germain.

On Sunday, August 8, Lionel Messi confirmed to the world that he has left Barcelona in an emotional speech made in a press conference at the club’s office.

The six-time Ballon d’Or winner was unable to withstand the claps from his wife, three sons and people on the chairs thereby breaking down into tears.

The Argentina international also confirmed in the press conference that Paris Saint-Germain could be his next destination and there have been talks that they club have made a move.

According to the lates report on UK Sun, Manchester United may put a deal on the table that will convince Lionel Messi to make a move to the Premier League.

It is thought the Red Devils are crunching the numbers to work out if they can afford a deal.