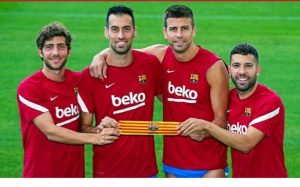 Following the departure of Leo Messi, Barcelona have a new captain.

Sergio Busquets is the heir to Messi’s armband, followed by Gerard Pique,Sergio Roberto and Jordi Alba.

Busquets, Pique and Sergi Roberto were among the vice-captains in previous seasons, while the left-back is added to the list of official Blaugrana captain list after leading Spain at Euro 2020 before Busquets’ return.

During Sunday’s game against Juventusin the Joan Gamper Trophy, Busquets made his official debut as first team captain.

The Catalan midfielder only had words of affection for his predecessor Messi ahead of the game.