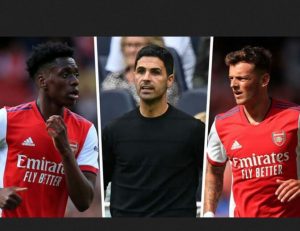 The Gunners finished their pre-season with defeat at Spurs, and though their new signings are settling in nicely, they are crying out for creativity

Arsenal ended their pre-season campaign with a defeat on Sunday, going down 1-0 at Tottenham.

Son Heung-min’s goal late in the second half was enough to sink the Gunners, who kick-off the new Premier League season with a London derby at newly-promoted Brentford on Friday.

It was a second successive defeat for Mikel Arteta’s side, following on from last weekend’s game against Chelsea at the Emirates Stadium, which saw the Blues win 2-1.

There were, though some positives for the Gunners against Spurs, with new signings Ben White and Albert Sambi Lokonga impressing, but there were also worrying signs ahead of the new campaign, especially in attack where familiar woes remain.

Below, Goal goes through the major talking points from Arsenal’s final pre-season clash of the summer…

It may only be pre-season, but it is difficult not to be concerned by the performances of Pierre-Emerick Aubameyang this summer.

After such a disappointing campaign last time out, a lot is expected from the Arsenal captain in 2021-22, but there have been few signs in recent weeks that he is about to rediscover his best form.

Aubameyang has played in all six of Arsenal’s pre-season friendlies and failed to find the net in any of them. The Gabon international had plenty of chances across most of those matches, but could not take them.

Against Spurs, however, he never looked like a threat while playing out on the left once again, mustering just one shot and failing to create a chance for any of his team-mates.

With so few goal threats in the Arsenal side, Arteta desperately needs his skipper at his best, so his lack of form and poor all-round play will be a real concern on the eve of the new season.

Arsenal are a side who do not create many chances, and against Tottenham they once again paid the price for failing to take advantage of their superiority when they were on top – especially in the first half.

Aubameyang used to be the man the Gunners could rely on to take an opportunity when it came his way, but right now he looks a pale imitation of the striker who scored so prolifically during his first two full seasons at the club.

He was replaced by Bukayo Saka midway through the second half and it would be no surprise if he found himself on the bench when Arsenal kick off the new season.

With the start of Arsenal’s Premier League campaign just six days away, the starting XI against Spurs was always going to give a clear indication as to what Arteta was thinking ahead of the game at the Brentford Community Stadium.

With Thomas Partey set to miss at least three weeks with the ankle injury he sustained against Chelsea, one of the big question marks was over who would line up alongside Granit Xhaka in the heart of midfield.

Mohamed Elneny seemed to be the most likely partner for Xhaka, with the majority presuming Arteta would favour the experienced Egypt international over recent summer signing Albert Sambi Lokonga.

But, having produced an eye-catching cameo during the 2-1 defeat against Chelsea, it was Lokonga who got the nod at Spurs, and the 21-year-old Belgian showed why Arsenal are so excited to have landed him from Anderlecht.

He was one of the team’s stand-out performers in the first half, showing real composure on the ball in tight spaces.

Lokonga completed 31 of 32 passes in the opening 45 minutes, with a success rate of 96.9 per cent, and no Arsenal player had higher. He also gained possession three times, made one tackle and one interception.

It was an impressive performance against top opposition, and you would think he has now assured himself of a starting spot for the Premier League opener.

Eyebrows were raised at Arsenal’s decision to splash out £50 million ($69m) to sign Ben White from Brighton, but the England international could soon silence his doubters if he continues to perform as he did against Spurs.

Playing alongside Pablo Mari in the heart of the back four, White was hugely impressive and showcased all the qualities that persuaded the Gunners to make him the most expensive defender in the club’s history.

White was excellent on the ball and was more than happy to carry it from deep, looking to get Arsenal on the front foot whenever he could.

He made 41 passes during the 63 minutes he was on the pitch – only Xhaka made more – and 36 of them were successful.

His quality when in possession was evident as was his reading of the game. He made more interceptions (two) than any other Arsenal player and only Xhaka (three) made more than his two clearances.

White already looks at home in north London and, if he continues to produce these sorts of performances, those questions marks about his lofty transfer fee will soon be forgotten.

The need for creativity is clear

Whether it be James Maddison, Martin Odegaard or even Houssem Aouar, Arsenal need to move quickly to add to their creative ranks this summer.

With the transfer deadline now just over three weeks away, the Gunners have yet to fix what should have been their priority in the market.

A lack of creativity continues to be a major problem for a side that scored just 55 goals in the Premier League last season.

The club have been looking for a new attacking midfielder to share the creative burden with Emile Smith Rowe, but so far they have been unable to bring anyone in.

Odegaard was the priority, but he looks set to remain with Real Madrid this season, so Maddison is now a genuine target. He will not come cheap, though, with Leicester City believed to want more than £60m ($83m) for the England international.

It is a situation that Arsenal must resolve quickly, because if they do not bring someone in, the problems that saw them struggle to kill teams off last season will continue.

“What we have is what we have – [we have] to maximise that and there’s no point worrying about things we don’t have,” Arteta said, when asked whether he was happy with his attacking options ahead of the new season.

“My energy is all in the players we have, to make them play better, be a better threat and make them win matches.”

The problem for Arsenal though is they are always going to struggle to win matches due to the lack of quality opportunities they create.

It is clear that they need to bring someone in before the end of the month. If they do not, then it could be another long season for Arteta’s side.

“We will explain the reasons when we can.”

Those were the words of Arteta when he was asked to explain the absence of Joe Willock from his squad against Tottenham.

Quite why Arsenal’s manager was so coy on the subject was unclear, because it was hardly a secret a time that the Arsenal midfielder could have been heading back to Newcastle in the coming days.

Steve Bruce had made it clear how much he wants to sign Willock following his impressive performances while on loan at St James’ Park last season, and it has now emerged that Willock was left out of the squad to face Spurs because he was close to finalising a move back to the north-east.

Arsenal are desperate to move some players on, and their hopes of adding to their squad before the end of the window would be massively boosted by bringing some funds in.

Selling Willock is set to generate close to £25m ($35m), but it will also see them lose an attacking midfielder who is a genuine goal threat. That is hardly ideal when you struggle massively for goals from midfield.

It has been a decision Arsenal have wrestled with all summer and it appears that they have now finally made a decision.

Whether it is one they live to regret will depend on how they reinvest the funds they receive for their talented academy product.