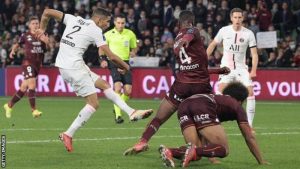 Hakimi curled into the bottom corner in the 95th minute for his second strike of the match to make it seven straight wins for Mauricio Pochettino’s side.

The Morocco right-back had put PSG ahead after just five minutes.

Centre-back Boubakar Kouyate headed in from a corner to bring bottom side Metz level before half-time.

But the hosts, reduced to 10 men in added time when captain Dylan Bronn was sent off,

for a second yellow card for kicking the ball away, were unable to hold out for a hard-earned point as Hakimi finished from Neymar’s pass.

PSG were without Lionel Messi after he sustained a knee injury in Sunday’s win over Lyon.

It is not known if he will be fit to feature against Montpellier on Saturday,

or in Tuesday’s home Champions League meeting with Manchester City.

PSG made their dominant start count through Hakimi’s opener.

Which was confirmed by goalline technology after defender Matthieu Udol had blocked Mauro Icardi’s shot, but fell short of repeating his heroics.

Metz were rewarded for their positive response as Kouyate’s powerful header,