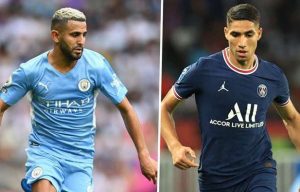 Following the  Thursday draw  in Istanbul, below are the African stars that will match-ups in the group Stage.

With Manchester City and Paris Saint-Germain drawn against each other in Group A,

(also including RB Leipzig and Club Brugge), an intriguing contest lies ahead between Riyad Mahrez and Achraf Hakimi.

when the Citizens came out victorious with a 4-1 aggregate win.

So far, Hakimi and Mahrez have made a good start to the season.

With the former contributing a goal and an assist for PSG while the Algeria captain has scored a goal in two games for Pep Guardiola’s side.

Read Also: Benjamin Mendy Has Been Charged With Four Counts Of Rape

Atletico Madrid, Liverpool, Porto and AC Milan are expected to fight their way to the knockout round in Group B.

Mane and Salah have helped the Reds secure back-to-back wins in their opening Premier League fixtures while Kessie’s brilliance in the middle of the park powered the Rossoneri back to the elite European competition this term.

Porto’s Nigeria defender Zaidu Sanusi will be aiming to stop Liverpool’s Mohamed Salah and Sadio Mane in Group B.

The 24-year-old played an important role in the Dragons’ run to the Champions League quarter-final stage last season where they were eliminated by Chelsea.

Europa League champions Villarreal are paired against their final opponents Manchester United, as well as Atalanta and Young Boys in Group F.

After missing the Europa League final in Poland back in May,

Samuel Chukwueze and Arnaut Danjuma might be looking to face the Red Devils,

however, their outing against Young Boys is predicted to be of huge African interest.

The Swiss Super League giants parade DR Congo’s Meschack Elia who has been in fine goalscoring form this season,

with two goals in two league games and he opened his Champions League goal account during the qualification stage.

They also have Cameroon striker Jean-Pierre Nsame who guided them to their fourth top-flight crown in a row with 19 goals in 30 league matches last season.

RB Salzburg’s teenage sensation Karim Adeyemi has lit up the Austrian Bundesliga with six goals in five games so far this term,

and he will fancy his chances when he faces Sevilla’s Morocco goalkeeper Yassine Bounou.