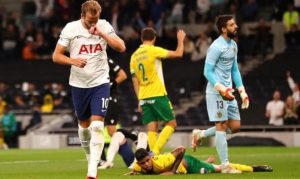 Harry Kane scored twice on his return to the Tottenham starting line-up as Spurs,

Trailing 1-0 after the first leg in Portugal, Kane opened the scoring after a lovely pass by winger Bryan Gil.

Kane, starting his first club game since 23 May after announcing on the eve of the match he was staying at Spurs “this summer”, added a second before half-time from close range.

Giovani Lo Celso capped a fine Spurs performance when his free-kick was deflected in for a third goal which sealed the hosts’ victory.

Tottenham will discover their group opponents on Friday, with the draw scheduled to start at 12:30 BST.

Kane back with a smile

With his immediate future resolved following interest from Manchester City,

Kane was named captain for this game as Nuno Espirito Santo’s side looked to bounce back following a limp display in Portugal last week.

Kane went close to scoring in the opening 15 seconds before levelling the aggregate score inside 10 minutes after a fine pass by the impressive Gil.

The England captain looked eager to make up for lost time and was celebrating again after a clinical finish put his side ahead on aggregate for the first time in the tie.

It was just like old times as Kane celebrated with a huge smile on his face as Spurs fans chanted his name.

With Watford due at the Tottenham Hotspur Stadium on Sunday, Kane was replaced after 72 minutes.

By then Spurs had all but confirmed their place in the next stage after stretching their lead further.

Lo Celso’s delivery looked like a cross and it took a nick off Pacos defender Antunes, but the Argentine was credited with the goal.

It was a thoroughly professional performance by Nuno’s side,