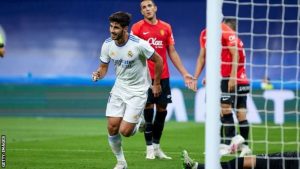 Asensio scored twice in five first-half minutes – either side of Lee Kang-in’s well-taken response for the visitors.

The Spaniard found the bottom corner to make it 4-1 10 minutes after half-time.

Karim Benzema had opened the scoring after three minutes and added a late fifth for Real, before Isco completed a 6-1 rout with six minutes remaining.

Atletico Madrid had moved top following a 2-1 win against Getafe on Tuesday.

But now sit two points behind Carlo Ancelotti’s side – with both teams unbeaten after six games.

A slip by defender Josep Antoni Gaya Martinez allowed the in-form Benzema to get Real off to the perfect start.

Asensio – who left Mallorca for Real in 2015 – doubled the advantage,

when Vinicius Junior’s cut-back was pushed into his path by the goalkeeper,

and he then further extended Real’s advantage, finishing from a couple of Benzema assists for his second and third goals.

Benzema made it eight goals and seven assists in La Liga this season.

With a deflected second goal of the night, before Vinicius teed up substitute Isco to round off an impressive display by the hosts.