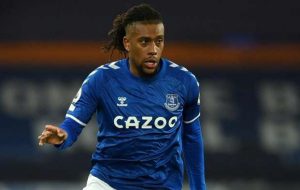 The Nigerian International is struggling under the Spanish manager  despite featured in the Toffees’ opening two league matches.
Former Everton left-back Michael Ball believes,
Alex Iwobi is finding it difficult to adapt to Rafa Benitez’s tactics at the Goodison Park this season.

After coming off the bench in their 3-1 win over Southampton in their Premier League opener,

Iwobi earned a spot in the Toffees’ starting XI against Leeds United on Saturday.

He played for 75 minutes in their 2-2 draw at Elland Road before he was replaced by Andros Townsend.

Before his substitution, the Super Eagle winger completed the second-highest dribbles (two) after Allan (three)

and he also managed the second-highest pass accuracy (87.5 per cent) after Demarai Gray (91.7 per cent).

On the other hand, he was the most dispossessed player in Benitez’s team,

(three times) and he did not manage any shot on target in the game.

Having scored just four goals across all competitions in his last two seasons at the Goodison Park,

Ball criticised Iwobi for not being good enough since he moved to the Merseyside from Arsenal in August 2019.

“He’s complained in the past that he’s not playing in his favourite position. What position that is, I’m not too sure,”

“Desire and effort he’s got, he shows it, when he’s playing out of position,

Alex work hard so you can’t fault him on that but I just think his ability, especially under Rafa and under Carlo, tactical wise, let him down a little bit.”

Over the past two years, Iwobi has played in different positions at Everton either as a wing-back or midfielder,

though, he stars at the centre of the midfield for Nigeria.

What was previously said by iwobi?

“Always an honour to get a call up for my national team. Hopefully, I get to play in my preferred position,” the 25-year-old wrote in his Instagram Story back in March.

Carlo Ancelotti, however, replied the former Arsenal midfielder to name his preferred position before he returned to Real Madrid at the end of the 2020-21 season.

“I read the post. I want to speak to him, of course.I want to know his preferred position,

because, usually,I want to put a player on the pitch where they are comfortable to play,

not where they are uncomfortable to play,” Ancelotti said.

“If he has an idea of where he prefers to play I have to know, I want to know. I would be delighted to know his preferred position,

and I’ll put him in his preferred position for sure, no doubt.

“I am going to tell him: ‘Tell me, I am your manager, tell me where you want to play.

When I thought to put Pirlo as a holding midfielder I asked him: