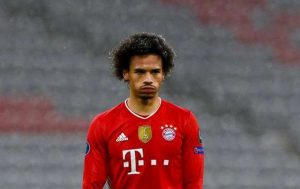 The Bayern winger was replaced at the break on Sunday after a poor first-half Display, with supporters delivering derision from the stands.

following his performance against Koln, but he believes the winger can bounce back in the vein of club legend Arjen Robben from his rough reception.

Germany international Sane was substituted at half-time in the Bavarian heavyweights’ 3-2 Bundesliga victory on Sunday,

following a poor first-half performance, with his exit met with a chorus of boos from supporters in the stands.

Both manager Julian Nagelsmann and team-mates have already defended the 25-year-old,

and former West Germany great Rummenigge has now admitted that he has sympathy for the out-of-sorts Sane.

“I didn’t like that. I feel a little sorry for him. He always tries, but he lacks self-confidence,”

“He had a bad last season and the European Championship, which of course doesn’t help.

“Nagelsmann must now try to get him back on track. You have taken too much money into your hands for that,”

The 67-year-old further spoke of one of the uglier chapters during recent Bayern history,

The Dutchman subsequently earned sweet redemption a year later when he struck an 89th-minute winner against Borussia Dortmund in the same fixture at Wembley to earn the club the famous trophy, having come close to leaving amid the reaction from the stands.

“[Sane’s situation is] comparable to the situation of Arjen Robben,” Rummenigge added. “Arjen wanted to leave us, but we rebuilt him and held him. A year later he became the match winner against Dortmund.”

Sane has struggled to settle at Bayern since he made the move from Manchester City last year, not helped by a long injury lay-off throughout his final season at Etihad Stadium.

Despite helping the club to another Bundesliga crown last season, he made only 12 top-flight starts last term.