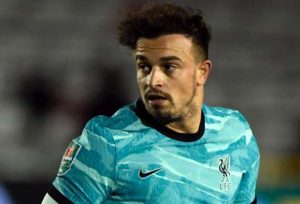 Liverpool midfielder Xherdan Shaqiri has completed his move to Lyon on a €6 million (£5m/$7m) three-year deal.

The Switzerland international swaps the Premier League for Ligue 1 following,

a three-year spell that saw him win domestic, European and world honours at Anfield.

Now he arrives at Groupama Stadium on a contract that runs through June 2024,

bringing to an end a six-year stay in England that also included a three-year spell with Stoke City.

Liverpool had rejected Lyon’s initial offer, thought to be worth only £4m, earlier this month,

with sources describing that particular bid as “ridiculous.”

However, the determination of Lyon’s sporting director Juninho Pernambucano,

and manager Peter Bosz to land their top summer target has meant, after lengthy negotiations, a deal could be agreed.

“Olympique Lyonnais is pleased to have finally reached an agreement in principle with Liverpool for the transfer of the Swiss international midfielder, Xherdan Shaqiri,” a statement on Lyon’s website read after confirmation of the move.

“Xherdan Shaqiri has today completed a permanent transfer to Lyon after three years with Liverpool.

Everybody at Liverpool FC thanks Xherdan for his contributions over the past three seasons and wishes him the very best for the rest of his career.”

Shaqiri had informed the Reds of his desire to leave this summer in search of regular game time.

He will leave having made 63 appearances for the club since joining from Stoke in 2018, and as a Champions League,

Any plans to replace him?

That seems unlikely, in terms of a direct replacement.

as a player who can play either as part of a midfield three or wide on the right of the attack.

Elliott made his first Premier League start in Saturday’s 2-0 win over Burnley,

while Liverpool are also enthused by the progress of another teenager, 16-year-old Kaide Gordon, whose development will be watched closely.

Jurgen Klopp has hinted that it is unlikely there will be any further midfield additions before the transfer window closes,

though, it remains to be seen whether Liverpool look to add an attacker.

They are still open to offers for Divock Origi, who was not in the squad against Burnley,

while defenders Nat Phillips and Neco Williams may also attract bids in the coming days.