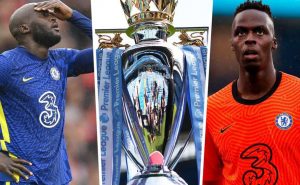 The Senegal star turned heads with his brilliant display against Arsenal, and he has been tipped to play a key role if the Blues are to win the league

The Blues continued their impressive start to the 2021-22 English top-flight campaign with a 2-0 defeat of Arsenal at the Emirates Stadium on Sunday.

However, it was Mendy’s eye-catching showing that caught the fancy of the former Sunshine Stars forward, as the 29-year-old goalkeeper prevented the Gunners from getting a goal, while organising the defence.

“Kudos to [Romelu] Lukaku for getting a goal on his return to Chelsea, but I feel Edouard Mendy deserves all the accolades for a job well done,”

“After a solid job against Crystal Palace, he put up another masterclass to ensure the Blues did not concede a goal in their second successive outing.

“Even when Chelsea’s backline looks shaky, he showed class to put the chestnut out of the fire. He was the reason Arsenal did not get a goal despite numerous attempts.

“Personally, I think Mendy is the key man to their ambition of emerging as Premier League and not Lukaku like many are already saying.

“Without the Belgian, I still believe the Blues have a way of getting the goals, but in the goalkeeping area. Even Kepa [Arrizabalaga] cannot do the brilliant job Mendy is doing at the moment.

“Also, I feel that he [Mendy] is not getting the accolades he deserves. He is pure class and Chelsea are very lucky to have him in their squad.”

Mendy was lured from Ligue 1 outfit Rennes in a £22m ($31m) deal as the six-time English top-flight kings sought to find greater stability between the sticks as costly errors had crept into Arrizabalaga’s game.

Appreciatively, he has since proven to be one of their bargain signings, helping the Londoners win the Champions League and the Uefa Super Cup.

He is expected to be in goal when the Stamford Bridge giants take on Jurgen Klopp’s Liverpool in their next league outing on August 28.

As it stands Thomas Tuchel’s men lead the log on superior goals difference ahead of the Reds after garnering six points from two matches played so far.