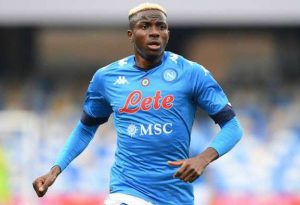 The Super Eagles forward had a forgettable start to the campaign at the Stadio Diego Armando Maradona.

Napoli striker Victor Osimhen was shown a straight red card in their Serie A opener against newly promoted Venezia on Sunday.

Osimhen was punished for a violent conduct on Daan Heymans in the 23rd minute.

Despite the numerical disadvantage, Luciano Spalleti’s men held their visitors to a goalless at halftime.