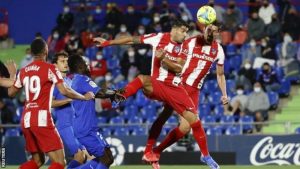 Getafe’s first goal against Atleti since 2011 came when Stefan Mitrovic’s header hit the post and went in off goalkeeper Jan Oblak’s hand.

That was the first time they had netted in 20 meetings with Atletico since Diego Simeone took charge.

But Carles Alena was sent off for Getafe and Suarez then scored twice as the visitors stayed unbeaten.

First he controlled Mario Hermoso’s pass before getting the ball on his left foot,

and firing home the equaliser. In the last minute he headed in Sime Vrsaljko’s cross.

Read Also: Takumi Minamino With Brace As Liverpool Knocked Norwich Out Of Carabao Cup By 0-3

Luiz Suarez said after the match.

“Every player at the top level has to learn to live with criticism,

but what I do is never give in. I’ll never get beat down by criticism.

“Above all I’m happy because of the circumstances of the game.

And that we managed to turn the scoreline on its head after.

“We still need to improve and solve a few things that we are not doing well.

But things will improve because the season has barely started.”

Atletico are one point ahead of Real Madrid, who have a game in hand, at the top of La Liga.