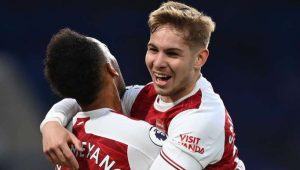 The Garbon International Revealed that his children will have a chance to be like Emile Smith and Bukayo Saka after their starring displays in their 3-1 win over Tottenham Hotspur.

Smith Rowe and Saka grabbed a goal and an assist each in Sunday’s North London derby.

He  providing the assist that helped Aubameyang score their second goal at the Emirates Stadium.

The duo developed through Arsenal’s Hale End academy before earning their spots in Mikel Arteta’s side.

Emile Smith Rowe (21) and Bukayo Saka (20) have assisted one another five times,

in the Premier League; among duos when both aged 21 or younger.

Only Cristiano Ronaldo and Wayne Rooney (8) have assisted one another more often in the competition’s history. Partnership.

Aubameyang is delighted that his kids can emulate the England stars when they begin their football career development.

“Arsenal can be proud of these boys [Emile Smith Rowe and Bukayo Saka] because they are great guys who are doing well,”

“I’m happy that my kids will go to Hale End and maybe one day be like Smith Rowe.”

in his fifth appearance and manager Mikel Arteta can not overemphasize his influence,

in the team with the Gunners currently on a four-game winning run in all competitions.

He was getting criticised and we were asking him to do more,”

“He stood by it and put his head down.

And he is working tremendously hard for the team, and now I can tell you that he is really giving.