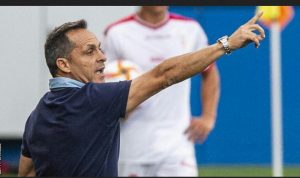 Barcelona have appointed Sergi Barjuan as their interim coach following the sacking of Ronald Koeman.

Barjuan, who is currently in charge of the club’s B team, will be introduced to the senior squad on Thursday by club president Joan Laporta.

“His interim position as first-team head coach will end as soon as the club has hired a full-time head coach,” said the Nou Camp club.

Barjuan’s first game will be at home against Alaves on Saturday, 30 October.

Koeman was dismissed following Barcelona‘s defeat at Rayo Vallecano on Wednesday after only 14 months in charge of the Catalan side.

He left with the club ninth in La Liga and six points adrift of leaders Real Madrid.

Barjuan played as a left-back for Barcelona after coming through their academy.

The former Spain international went on to win three league titles with the club.