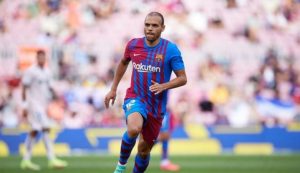 The Denmark international, 30, suffered injury to his left knee in the 2-1 win against Getafe on 29 August.

Barcelona said the injury had not responded to “conservative treatment” and he will have surgery in the “coming days.”

It adds to the club’s woes in attack with new signing Sergio Aguero yet to make his debut following a calf injury.

Aguero, 33, is not expected to return until October.

Spain forward Ansu Fati, 18, is also yet to feature for Barcelona this season.

As he continues to recover from knee surgery.

He has scored twice in his side’s opening-day win against Real Sociedad.

Barcelona face Bayern Munich on Tuesday at the Nou Camp in their Champions League group opener.