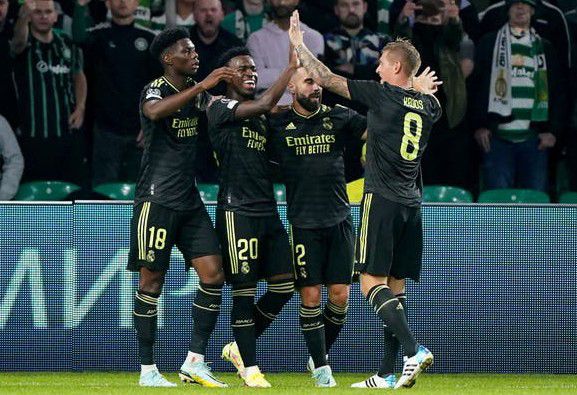 Real Madrid have got their Champions League title defence off to the perfect start, beating Celtic 3-0 at Parkhead.

Before the match Ange Postecoglou, the Celtic manager, made it clear that he had no intention of abandoning his attacking principles in an effort to contain Real, calling on his players to test themselves against the title holders.

The Hoops rose to the challenge, flying out of the blocks and putting their opponents under pressure straight from kick off.

With barely a minute on the clock Giorgos Giakoumakis teed up Liel Abada, whose low drive was deflected just wide by Eder Militao.

Celtic unsettled their opponents with aggressive pressing from the front, with Giakoumakis, Abada and Jota forcing a string of mistakes while Reo Hatate set the tempo further back.

Abada had another big opportunity early on when he was played in by a hooked pass from Jota, but he could only fire straight at Thibaut Courtois.

He gave Courtois a scare with an effort which trickled past the near post not long afterwards, though it looked like he may have intended it as a cross.

Having forced his opponent to concede a throw-in high up the field which Celtic managed to convert into a corner, he laid the groundwork for an excellent chance when Hatate thrashed a fierce drive on target on the follow-up and forced Courtois to palm the ball away.

Barely a minute later, Celtic went within a whisker of opening the scoring.

Giakoumakis held up the ball in the box before laying it off to Callum McGregor, who rattled the post with a swerving shot.

Hazard wasted an excellent chance after he was picked out by Carjaval, scuffing his shot wide of the upright, before Joe Hart was called into action to deny Vinicius Junior one-on-one.

Real ended the first half in the ascendancy, firing several warning shots at their hosts.

Immediately after the break Celtic went painfully close to scoring when Josip Juranovic crossed to the feet of Daizen Maeda, on for Abada, only for him to flick the ball into Courtois’ waiting arms from close range.

With 56 minutes on the clock, Valverde tore up the right flank once more and crossed to Vinicius who, unmarked in the middle of the box, tapped the ball into the back of the net. A few minutes later, Celtic lost the ball in midfield,

Real broke forwards through Hazard and, after a neat pass, Luka Modric applied the finish.

Hazard got on the scoresheet himself with a little under 15 minutes to play after Toni Kroos had looped a ball over the top to Carvajal,

who set up the Belgian for another tap-in. It felt harsh on Celtic, but Real pride themselves on their ruthlessness and, even when they are far from their best, they are still unforgiving opponents.