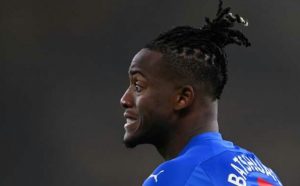 Chelsea striker Michy Batshuayi is closing in on a move to Besiktas, according to the Turkish club’s coach Sergen Yalcin.

Batshuayi did not figure to be in the Blues’ plans for 2021-22, with the recent arrival of Romelu Lukaku pushing him further down the depth chart.

Now, the 27-year-old looks set to continue his career in Turkey.

“The club is trying to sign a good center forward,” Yalcin said. “We are now negotiating with Chelsea’s Michy Batshuayi.

“If everything goes well, we expect him to come here next week.”

Batshuayi joined Chelsea from Marseille ahead of the 2016-17 season in a deal worth €40 million.

The Belgian scored just five league goals during his debut season at Stamford Bridge, but managed to score a late winner against West Brom in May 2017 to clinch the Premier League title for the Blues.

Batshuayi has failed to lock down a regular role with Chelsea during his time with the club, and has spent time on loan with Crystal Palace, Valencia and Borussia Dortmund.

Last season Batshuayi struggled in his second stint with Palace, scoring just two goals all season for the London club.

Batshuayi was named to Belgium’s Euro 2020 roster this summer, making one appearance at the tournament as the Red Devils fell to Italy in the quarter-final.